Oliver is a wordsmith whose subjects are nature, beauty, joy, and loss. She stuns the reader with the originality of her description and insight.  The Pulitzer Prize winner constantly reminds us to “pay attention” and to “be amazed.” Her poems are word pictures of the incredible natural beauty she sees on morning walks in the Cape Cod landscape.  Her fearless gaze looks at death, animal survival, and impermanence with the same reverence. 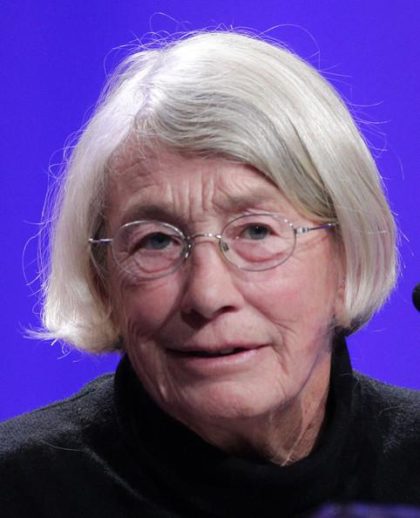 Mary Oliver began her connection with nature as a child and wrote poetry at the age of 14.  When she was 17 she formed a friendship with the sister of Edna St. Vincent Millay, and helped her organize the late Millay’s papers.  Oliver attended Ohio State and Vassar in the mid-1950s, but did not graduate from either. Later, as her reputation as a poet grew, she held teaching positions with and received honors from several universities.

Oliver won the Pulitzer Prize for Poetry (1982) for her collection American Primitive and the National Book Award (1992) for New and Selected Poems.  She was American’s best-selling poet in 2007.

Oliver’s childhood connection to nature grew and colored her prose and poetry throughout life.  “Her poems are filled with imagery from daily walks near her home:  shore birds, water snakes, the phases of the moon and humpback whales,” as stated in Beacon Press.   Her analysis and adoration of nature is fresh and the voice is uniquely hers. She observes human nature with unbridled honesty.

Oliver’s long-time partner was photographer Molly Malone Cook.  They shared a home in Provincetown, Mass. for 40 years until Cook’s death in 2005.

In “When Death Comes” Oliver writes

“When it’s over, I want to say all my life
I was a bride married to amazement.
I was the bridegroom, taking the world into my arms.

When it’s over, I don’t want to wonder
if I have made of my life something particular, and real.

I don’t want to find myself sighing and frightened,
or full of argument.

I don’t want to end up simply having visited this world.”

There are many online sources for reading a sampling of Oliver’s poetry. 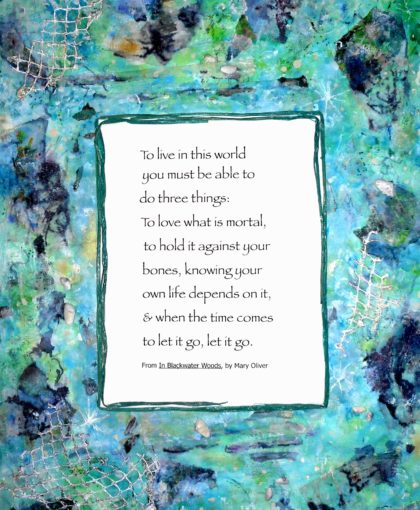 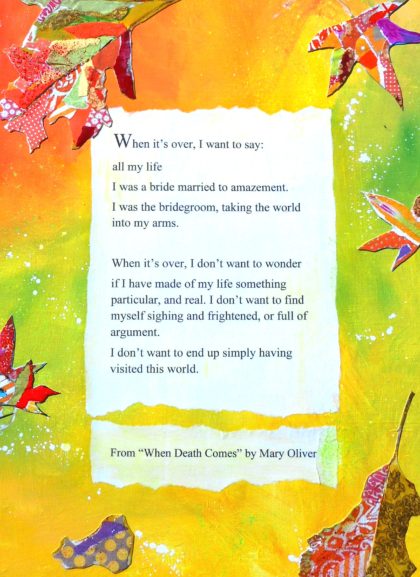