ALVIN AILEY AND THE PAINTING FIX ME JESUS 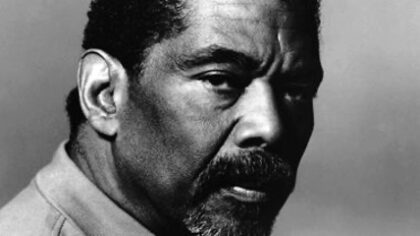 The painting Fix Me Jesus by artist Carol Hobbs depicts dancers in their final position in Fix Me Jesus, a segment in the dance production Revelation, choreographed in 1960 by Alvin Ailey for the Alvin Ailey American Dance Theater.  This production, like most of his creations, is inspired by his “blood memories” of Texas, the blues, church spirituals, and gospel.

AAADT became one of the first integrated American dance companies to gain international fame.  Since its inception, the Ailey Company has gone on to perform for an estimated 25 million people at theaters in 48 states and 71 countries on six continents.   In 2008, the U.S. Congress proclaimed the Company “a vital American cultural ambassador to the world,” promoting the uniqueness of the African-American cultural experience and the preservation and enrichment of the American modern dance heritage.  In 2014, President Barack Obama selected Ailey to be a posthumous recipient of the Presidential Medal of Freedom.

Alvin Ailey was born in 1931 in Rogers, Texas.  Ailey’s father left the family when Ailey was three, leaving him and his mother to work in cotton fields and as domestics to survive.  Ailey and his mother moved often in search of reliable employment.  One source of stability was the church, a place where his mother sang in the choir and Ailey learned the spirituals that would greatly influence future dance productions.

The small family moved to Los Angeles for more opportunity and a chance for a better life.  Ailey attended college to study language and writing, but grew to love the ballet and dance he saw in theater houses.  He began modern dance classes at Lester Horton Dance Theater School, one of the few schools that would accept Black students.  The eighteen year old liked the fluid moves that the school taught and soon developed a personal style.  In 1950, Alvin joined Horton’s dance company.  His next stop on the path to great dance was in New York.  He performed on Broadway and took lessons from Martha Graham and Stella Adler.

Ailey invited dancers who shared his own vision to form a dance group.  In 1958, he founded the Alvin Ailey American Dance Theater and the “rest is history.”  Today his legacy lives on in several ways:  through performance, community outreach, youth outreach, and professional education.

Alvin Ailey died at the age of 58 in 1989.    In 2014, President Barack Obama selected Ailey to be a posthumous recipient of the Presidential Medal of Freedom.   In 2019, Ailey was one of the honorees inducted into the Rainbow Honor Walk, a San Francisco tribute which honors LGBTQ people who have made significant contributions in their fields. 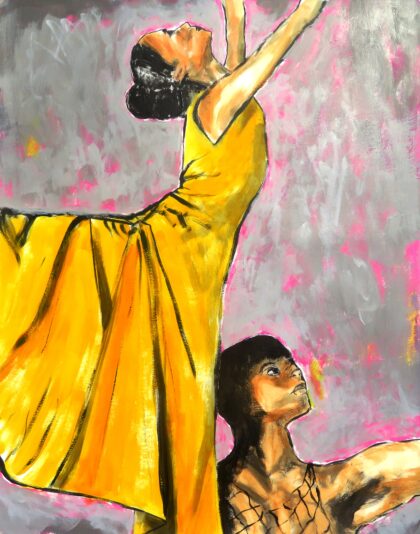 About artist Carol Hobbs:  Hobbs has been painting for almost 20 years.  She has studied with several local professional artists.  She is the founder of the North Georgia Sky Painters Society, a group which has exhibited at the TN Aquarium IMAX, The Gallery at Birmingham Botanical Gardens, and many area venues.  Hobbs has curated the UUCC Art on the Walls program for 12 years.