Toni Morrison and the Painting 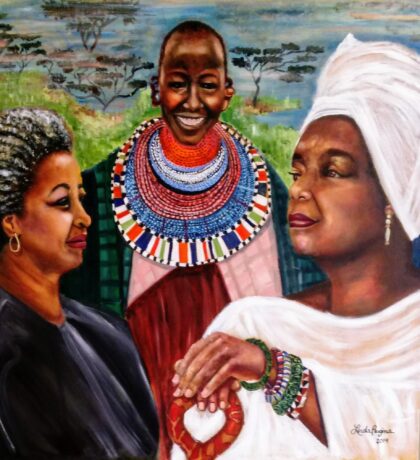 Linda Rugina’s painting portrays a middle-aged Toni Morrison standing with a Masai woman and Maya Angelou.  Morrison’s parents moved from Georgia to Ohio in search of racial equity and opportunity.  She was an avid reader as a child and served on her high school yearbook staff, drama club, and debate team.  She earned a B.A. in English from Howard University and a Master of Arts from Cornell.

After nine years as a university teacher, Morrison went on to become a senior editor at Random House.  Her first novel The Bluest Eye was written in segments at four in the morning while working as an editor and raising her children as a single parent.  After writing three more successful novels, she left Random in 1983 to devote more time to writing.

The novel Beloved won the Pulitzer Prize for Fiction in 1989.  Following the publication of Jazz, Morrison was awarded the Nobel Prize in Literature in 1993.  Her Nobel Prize lecture became assigned reading on many college campuses.

Artist Linda Rugina has exhibited at UUCC before as a member of the North Georgia Sky Painters.  She received a Bachelor of Fine Arts Degree at Valdosta State University and is the current director of North River Civic Center in Hixson.  Linda enjoys portrait painting and strives “…to capture the characteristics and soul of an individual’s personality.”