Siren of the Resistance by Janice Kennedy,

Josephine Baker was an accomplished, multi-faceted woman.  Born in St. Louis, Missouri, in June 1906, never knowing her father, she went to work as a domestic at the age of 8.  She was a child of the streets, scavenging for food and made a living doing street corner dancing.  At the age of 13, she worked as a waitress and married for the first time.  She began performing with a street performance group and, with much badgering on her part, began performing with the St. Louis Chorus vaudeville group. 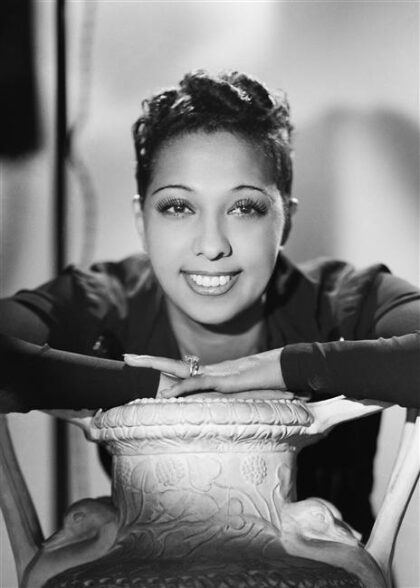 This work gave her the opportunity to travel.  She sailed to Paris at the age of 19.  She loved France and the people so much that she broke her contract in order to return there and soon became the star of the Follies Bergère.   A picture of her in a dance skirt made of a string of artificial bananas became the icon of the Jazz Age.  She was renowned as a dancer, singer, and actress.  Ernest Hemingway said she was the most sensational woman anyone ever saw.  Picasso painted pictures of her.  She was vaulted to international stardom, but she was so much more than that.

Josephine worked for the French Military Intelligence as a spy during World War II.  She had given up her U.S. citizenship in 1937, becoming a French citizen.  Her fame allowed her to travel to different countries and to socialize with high ranking Japanese officials and Italian bureaucrats without suspicion.   She transmitted information about air bases, harbors and German troop concentrations written in invisible ink on her sheet music.  She housed and obtained visas for those who were eager to help the effort of Charles de Gaulle.  After the war, she was honored with medals in France for her work.

When she returned to the United States of America to perform, she was turned away from hotels because of her color.  She refused to perform before segregated crowds which caused quite a furor.  She was successful in her demand to integrate her audiences and scheduled a nationwide tour.   In 1950, she was named NAACP’s Woman of the Year.  She criticized the Stork Club’s policy of discouraging black patrons and sent a scathing letter to Walter Winchell for not coming to her defense. He responded with a series of published rebukes, including accusing her of being a Communist sympathizer.  The USA subsequently terminated her work visa, forcing her to return to France.  She was not allowed to return to USA for over a decade.

She was invited to speak at the 1963 March on Washington.  Standing at the side of Martin Luther King Jr., one of her statements was especially memorable:  “You know, friends, I do not lie to you when I tell you I have walked into the palaces of kings and queens and into the houses of presidents.  And much more.   But I could not walk into a hotel in America and get a cup of coffee, and that made me mad.  And when I get mad, you know that I open my big mouth.   And then look out, ‘cause when Josephine opens her mouth, they hear it all over the world.”

About artist Janice Kennedy:  Janice is retired from a career with TVA as an analytical mathematician.  Upon retirement she began experimenting with art “to find balance.”  Using knowledge gained in classes and workshops, Kennedy’s unique style incorporates stenciling, collage, and patterning.   She exhibits with a number of area art groups and venues.  She was invited to present a one-woman show at Dalton’s Creative Arts Guild.  Her work can be seen at www.etsy.com/shop/kennedyjanice.   In the painting Siren of the Resistance, Janice hopes to “…depict  Josephine as  woman with flair and flamboyance while also showing that she was a grounded woman with firm beliefs that she was willing to fight for.”